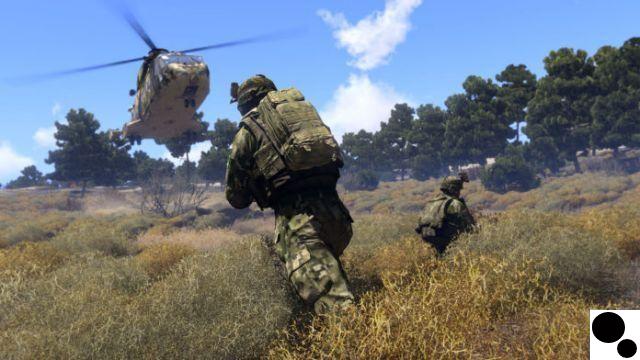 Military war games are abundant with new games coming out every year as well as some past hits that still prove to be popular. It's not easy to pick just a few video game titles, but in 2022 there will be games coming out that might interest a ton of gamers to check out or previous installments that still have a pretty strong online community. In this list, we're going to suggest a few games to watch this year or titles you can dive into right now.

Six Days in Fallujah had an interesting development process. This game first came to public attention in 2022 where it was shrouded in controversy. Since the game depicted an actual battle that had only taken place a few years earlier, the title was a little too early for most people's tastes. The attention and controversy generated by this game eventually caused then-publisher Konami to abandon the game altogether. Eventually Six Days in Fallujah was discontinued, until earlier this year when it It was revealed that the game was back in development for release in late 2022.

There doesn't seem to be as much controversy this time around, which might help the developers market this title, although we're still waiting to hear more about the project. That said, players can expect a more realistic tactical shooter with gameplay somewhat resembling Socom in the sense that you set up an attack while commanding your team. Of course, that said, it looks like there will be multiplayer support, which means you could potentially ditch AI companions for some friends as you try to relive the second battle of Fallujah, one of the most bloody to involve American troops since the Vietnam War.

War Thunder is an MMO military game, but rather than taking on the role of a soldier in the field, players fight against each other using different vehicles. There are all kinds of different vehicles that players can get into. From tanks, naval warships to aircraft, players will find a wide range of diverse vehicles suitable for all sorts of different situations. It's a game that's been around since 2022 as well, so not only is it full of content and DLC for players, but also a pretty active community. Not to mention, this is a free-to-play video game title, so there's no reason not to give this game a chance today with the free selection of titles players can play.

When it comes to game modes, some modes break down the different types of vehicles players can use, whether they want a more arcade experience or realistic battles, towards more historical missions that try to provide a bit more of a battle specify what happened. That said, it's worth mentioning that there are other vehicle-specific military war games you might be interested in, such as World of Warships and World of Tanks. As the name of the titles suggests, these games are specific to the type of vehicles players will be able to use.

We don't see too many WW2022 video games hitting the market compared to WWII, but that doesn't mean there aren't some video games to discover and enjoy in 2 with the backdrop to the Great War. One of the video game titles to choose from is Tannenberg, a game developed by M2022H that you might be familiar with from its other WWI video game title, Verdun. Tannenberg was originally launched in 2022 but it just saw a release on console platforms last year 1914. In this game we go through the Battle of Tannenberg which took place in XNUMX where Russia and Germany clashed in East Prussia.

Similar to Verdun, the developers aimed for a more realistic approach to the game with the weapons, uniforms, and of course, the environment in which players would fight. That said, while this game may be the most recent version of M2H, players who want a little more WWXNUMX military war action gameplay should check out their previous version. , Verdun.

Defcon is a game that was developed after some inspiration from the iconic 1980s thriller, Wargames. In this game, players take on the role of a general hiding somewhere underground in a bunker. Here you will be looking at an old computer screen to see what is going on in the world. With paranoia taking hold in the world, players are building up their forces to launch tactical strikes on other continents.

This real-time strategy game is all about making sure you have enough firepower to breach the military might of opposing forces in which you can slowly take them out with a barrage of attacks, even a nuclear strike. However, if you don't have enough resources when dealing with an attack, the counterattack can be difficult to resume. That said, this game is all about making sure you're the last one standing with fewer civilian casualties.

Squad is another military-oriented tactical FPS that has received positive reception from critics and gamers alike. It is a game that immerses players in team battles with hundreds of players launched into the world. This is a game you cannot expect to fall into and have a free-for-all experience as the developers and players aim to make it a realistic experience. Apart from the real weapons, vehicles and environment, one of the key elements of this game is the VoIP system placed in the title.

Players can communicate with their squad with different leaders using the game system's voice system. That said, this game isn't for everyone, if you don't want a more specific military simulation game, c It's a title to avoid, things can be a bit slow, there are more tactics to eliminate enemies and get players. into position before diving into the area or flying into a clearing.

Arma 3 has been around for years now. This title was released in 2022 and still, this game has a huge following. Fans are given a military sandbox style game with plenty of content available for single and multiplayer play. However, some fans may be interested in the fact that this game allows content creation with mod support. Here players can work out their scenarios, multiplayer game modes, as well as adding vehicles and weapons.

Nonetheless, this aims to be more of a military simulation game, so you can expect brutal gameplay if you don't take precautions when going through the various scenarios or even the online multiplayer game. You can spend enough time playing this game, but that said, there are a ton of fans wondering if and when we'll see a successor hit the market.

Pavlov VR is an early access title for those who love virtual reality games. It is a military shooter that can be compared to Counter-Strike in many ways. Players can join online or offline with bots, with a selection of game modes such as your typical deathmatch to more unique game modes such as Gun Game which rewards players with a different weapon each time they succeed in killing. Meanwhile, players can stow their weapons on either side of their body or back, but the bigger the weapon, the easier it is to control shots and aim using both hands.

Additionally, players can also create their maps to give players something new to try, but since this game is in early access, players should expect some gameplay changes as the studio is gearing up for the full launch. We could have placed a few other VR games in this list to highlight checkout titles that are more aimed at military combat, but we'll stick to just one. That said, if you have an Oculus Rift, we recently published a list of the best VR games for gamers to check out, which includes a few more military-focused shooters.

Hell Let Loose is another early access title with the game putting players in an FPS set in World War II. The video game takes players into different iconic battles where you will be just another soldier looking to help your team in a victory. With 50 vs. 50 battles, there are plenty of action-packed fights with players being able to communicate via the in-game VoIP system. Use vehicles, artillery support and place traps or barriers to further hold the line.

Since there are more tactics to play here, it is suggested to play and communicate with a group of players if not team up with friends. As a result, this is a team-oriented game where everyone has a job and must stick to it to win. Much like the other early access titles on this list, you can probably expect a few different tweaks and tweaks to the game as the studio prepares to fully launch Hell Let Loose.

Despite this, EA CEO Andrew Wilson has made comments in the past suggesting that the next Battlefield game will have a bigger scale than ever before. It's also a game that has a lot of destruction, just as the series is primarily known, but with the next generation of console platforms available, we imagine that wherever we end up being tossed about there will be a lot of buildings. and landscapes that will explode into pieces.

Finally, we have Call of Duty 2022 which, as we just mentioned in our previous point for Battlefield 6, this franchise has a new installment releasing every year. In 2022 we got Call of Duty: Black Ops Cold War, but for 2022 we don't yet know exactly where this next game will take us. We've seen all sorts of suggestions and rumors pouring in, including a few claiming that we'll be sent back again against the backdrop of WWII. There are a lot of areas we're waiting to see announced, such as tuning, new mechanics, as well as what this could mean for the incredibly popular battle royale game mode Call of Duty: Warzone.