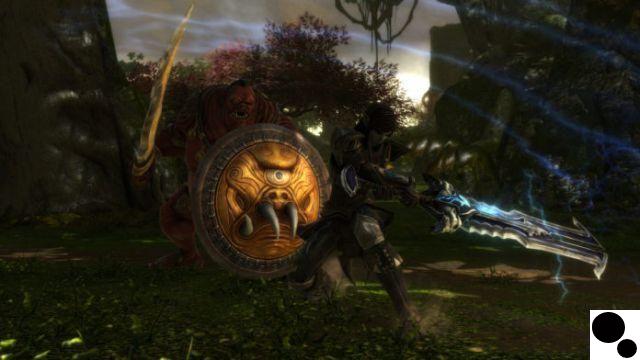 The Fable franchise has a strong following and over the years we've had a few installments. However, the title became dormant and those waiting for a new game had to resort to other similar titles. Thankfully, Microsoft has taken that IP off the ice and has a new reboot in the works at Playground Games. That said, if you're looking for something new to play to hold you over until the next exciting episode comes out, we've got you covered.

Fable is quite an iconic game and there are many elements that make it special for so many players. You have a ton of lore, different unique locations to visit, a storyline to keep you playing, the ability to change your character's appearance and morality, choices that lead to different consequences, lots of character leveling, as well as a beautiful fantasy world. Now, not every game on this list will tick all the boxes, but these should be decent enough titles to keep you busy for quite a while. That said, they are not listed in any particular order. Video games are just a few recommendations that might interest you.

One of the first games to come to mind is the Fallout franchise. It doesn't feature a fantasy world, but there are quite a few different mutated creatures to fight with. These games place players in a post-apocalyptic world after nuclear wars have flattened the Earth. Here, players typically take on the role of an individual who has managed to live a relatively easy life buried deep underground in a massive vault structure. Designed to house civilians around the world, these vaults protected humanity from radiation and the dangerous environment that became toxic above. Typically, players will exit the vault and begin their main quest line. These games all have a specific quest, for example in Fallout 4 you are looking for information on who broke into your vault and kidnapped your child while Fallout 3 had players venturing into the open world when your father disappears. There's a large open world, lots of choices to choose from, a ton of loot to scavenge, the ability to level up your character, and take on a wide range of storyline quests.

Vampyr might be a bit of an unusual game on this list, but let us explain. Within Vampyr, the game is set during the 1918 Spanish flu pandemic in London, where players take on the role of a doctor named Jonathan Reid. Our protagonist is in a difficult situation because he is a vampire with a bloodthirsty nature, but fights against his state with his Hippocratic oath. Players can travel parts of the world while leveling up the protagonist to unlock new abilities and skills from the skill tree. It should be noted that the skill tree will not be linear, which will allow players to open up the different playstyles available to enjoy as the game progresses. Likewise, your actual character image changes per game. about your choices.

Kingdoms of Amalur: Reckoning was a bit of a hidden gem back then. It's a title that had the Fable vibe and had a cult following, but this RPG just didn't reach the strides that other iconic titles were able to. However, there was a second chance for this game with some improvements called Kingdoms of Amalur: Re-Reckoning. There's a strong fantasy plot that has a lot of choices along the way, which offers some consequences. You will even find unique places to visit. Meanwhile, there are a ton of customizations that you can tweak your character as well so that you're not just locked into a protagonist with one type of playstyle. Luckily, as mentioned, you can dive right back into this game with modern platforms and it's a bit of a new release, so this should hopefully give gamers countless hours of gaming content to keep them occupied.

Kynseed is a game released in 2022 and still in Early Access. But what makes this game stand out on our list is that it comes from an independent development studio of several developers who worked on Fable. The game itself mixes an RPG-like adventure with a farming simulator. So think of a game that looks a bit like Stardew Valley where the storyline continues to continue long after your first protagonist dies as you continue your journey as your children. From there, you can run a business, adventure, farm, and decide what kind of life you want to live. Since this is an early access title, you'll likely see a lot of tweaks and updates made before it's readily available as a full video game.

Another series to check out is Overlord. This is a fantasy action RPG where players take on the role of a warrior risen from the dead and to defeat his enemies you will have control over small demonic creatures called Minions. It also helps bring some RTS elements into the gameplay, where players can send minions into battle while venturing into the game's narrative. While you're never really the good guy here, the title provides varying levels of evil that you can trigger, which offers more corruption in the world. Most of the game is a bit wacky and there are a few installments you can participate in.

Another game we can recommend is a title called Risen which was released in 2022. It's a fantasy world that needs a hero. Players will venture through Faranga Island which has different locations and environments. Arriving on the island as a stowaway, players will be able to join a faction and begin their journey, whether as a bandit, warrior, or mage. Players can expect an action RPG where there are a few choices and consequences that you could participate in. Likewise, you will have different skills and experience points to improve your character along the way. If you like this game, two sequels have since been released, although it seems most will find the first installment to be the first in the franchise.

The Dragon Age franchise is very popular after it first hit the market in 2022. Since then, we've had a few installments with spin-offs. They are fantasy RPG titles in which players go through a story, quests and fight against all kinds of evil monsters. So you have the fantasy aspect, the lore and a narrative to draw you into the game which is similar to Fable, but what you might also find interesting in this game has a play on reputation. In-game actions can put you in a positive or negative reception, which can affect how they will treat you. It's somewhat similar to Fable where the townspeople would react depending on whether you were considered a hero or a villain. Either way, the Dragon Age franchise is a pretty big IP and chances are you've already enjoyed the games. That said, we have a new installment in the works called Dragon Age 4 although we don't have a release date yet. We may very well have the Fable game rebooted before Dragon Age 4, but if not, you can at least dive into this game.

Another gaming franchise that might instantly come to mind is The Elder Scrolls. The same people behind Fallout, Bethesda, are also behind The Elder Scrolls, and chances are you've played some of these games before. It's another fantastic game with a ton of lore where you enter the world as a single protagonist who can go on countless quests while exploring all kinds of different locations. While there are plenty of installments available for this IP, you'll probably be most familiar with The Elder Scrolls V: Skyrim, the latest mainline installment available. It's also the game that Bethesda has made more accessible for platforms, so you can probably jump into this game with whatever gaming rig you have at hand. It's also an action RPG title, so you can fight real-time battles, and while there's loot to seek out that can change your character's cosmetics, physical characteristics remain the same no matter what species you start with. If you've somehow missed The Elder Scrolls V: Skyrim, there's a reason this game is constantly featured online and continues to find its way onto the latest platforms. You'll easily spend countless hours playing this game. Whether you're strictly looking for quest lines, exploration, or participating in different factions, there's just a huge amount of content waiting for you. the players.

The Outer Worlds is another open-world RPG that fans might find interesting and can give off a slight Fable vibe. It's not all fantasy here, as you're given a more sci-fi vibe in the distant future. Players take on the role of a crew member aboard a colony ship lost in space for years. However, you are rescued from your eternal slumber by a scientist deemed mad who asks for your help to not only overthrow the tyrannical control of the government, but also to free the rest of the colonists aboard the ship. Fallen on a planet, you are free to do what you want to do from there. It's a game full of quests and missions, but also with choices. Every choice will have some sort of consequence and there are some tough choices the game forces on you as well. Anyway, how this story will end in terms of the main storyline is also up to you. You can side with the scientist and help him or discover his location to turn the mad scientist into a government. What might turn some fans off is the length of the game. Without expansions that add new scenarios for players to complete, you're looking at a game that will only take you a little over twelve hours to complete the main scenario.

The Witcher series is another fantastic game that will pop up on many lists for simply being an amazing RPG. CD Projekt Red isn't presented in the best light per se right now after the problematic launch of Cyberpunk 2077, which is still being fine-tuned and worked on. However, before Cyberpunk 2077, this studio was held on a pedestal for so many fans around the world because of The Witcher trilogy. All three titles brought a ton of hours of fun as you took on the role of Geralt battling all sorts of hostile monsters. Although the first two installments can be a little difficult to approach visually, the third installment, The Witcher 3: Wild Hunt, continues to find so many newcomer fans today. It's an iconic RPG title and it will likely continue to find new players on a regular basis after the success of The Witcher Netflix original series. Again, there are a ton of quests to take on, a storyline that will keep you playing, a ton of interesting characters, and even plenty of places to visit. However, if you want to dive into this game, it's best to watch recap videos of events that happened before The Witcher 3: Wild Hunt if you're not interested in going back to the original two installments.