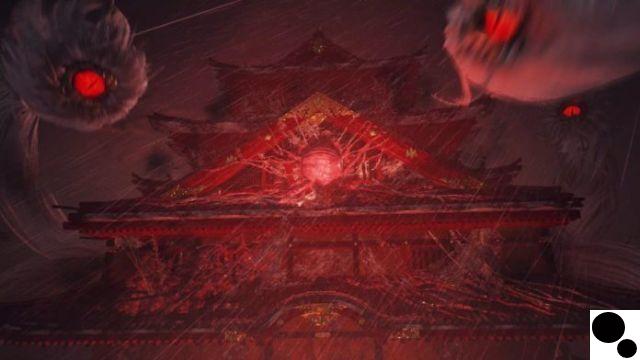 March to the grand finale with the powerful penultimate bosses of Nioh 2. There are drunken demons, castle-sized creatures, and a hidden mastermind behind the conflicts in Japan. These are some of the craziest bosses in the game to date - and that's saying something. If you've made it this far, you've overcome a pretty huge difficulty spike. It's mostly downhill from here. Until the next chapter, of course.

You will fight extremely strange demons and face old friends in battle. We cover all the major boss encounters in Chapter 6 - it seems like the last chapter, but there's a quick epilogue to deal with once you're done hunting baddies. There are four major bosses to deal with here, and there are some big story spoilers ahead. Just so you know before you scroll down.

This demonic entity from the past is finally free. Back from your origin story, he uses a canteen full of booze and a massive metal war club. When he drinks from his canteen, he spits fire if it is full. If it is empty, it will attack rather wildly.

When he enters the kingdom of darkness, he is drunk! He's actually a worse fighter here, staggering and stumbling over himself. If he falls, you can just stab him while he's on the ground.


You can Counter Burst his Gourd attacks. If he spits a flame, stand directly in front of him and time your Counter Burst as the flame hits you. This demon fights hard, so damaging his maximum Anima makes this fight much more manageable.

His whip is his most dangerous attack. When it roars and generates a red ring around it, dodge away to escape. You won't be able to guard against his hair attack!

Save your Yokai abilities until he enters the Dark Realm, then crush him. Unleash your abilities, drain his Anima and go crazy with him.

The boss rush ends with a truly terrifying monster – Lady Osakabe consists of six strands of hair with snapping tooth-encrusted eyes, with one giant eye poking out of the castle tower. Each eye fires a different projectile, and the tendrils closest to you will attempt to slip you.

To actually damage the boss, attack the tendril closest to the ledge. You can attack them with regular sword swings until they fall. Complete them and 25% of Lady Osakabe's animeter will drop. You can only damage the boss while she's stunned - attack the giant eye to deal around 25%-33% damage. You will have to rinse and repeat three or four times to knock it down.

To speed up the process, dodge his attacks and wait for a burst counter. This stuns them, giving you plenty of time to complete the spins.

After doing damage to her, she will enter the Dark Realm and all Tendrils will attack faster. Each time she will have less maximum anima, so you can make her wobble much faster. Your magic regenerates faster in the Dark Realm, so use your Yokai Summons faster. Knock down the tendrils, take her down three times, and finish her off with a naked-eye deathblow.

Your old friend has become your enemy. He wields two swords and possesses powerful fire-based magic. In the Dark Realm, he will unlock his true potential, summoning massive fireballs, attacking quickly, and teleporting to attack from above. Be ready to dodge when he pauses for his instant teleport attack.


Although Tokichiro fights fiercely, he doesn't have much HP. At this point, he's not fighting you much. You should be able to shoot it down before it lands too much. Drain his anima with Yokai attacks, especially in the Dark Realm, weaken him and stay on attacks until he goes down.

Your true enemy is finally revealed. Kashin Koji is a Yokai in human form – a wizard with a fairly wide range of magic spells. He'll throw fireballs straight up, summon lightning all around him from the sky, and swing a massive ice sword for his counterattack. For Burst Counter, either counters when his sword slams straight down or counters when it slides sideways.

In the Dark Realm, he will summon copies of himself that slowly drop attack with projectiles. Watch out for poison bubbles that generate poison fields on the ground. It will also teleport and attack faster - but like any dark realm, it will eventually fade if you can survive long enough.

After killing Kashin once, he will revive and start using his Dark Realm abilities all the time. In his second form, he has much less health than before. He will die faster, so you just have to keep attacking him. Wait for the Dark Realm to end (it respawns when it revives) and you can take this guy down.

add a comment of Nioh 2: How To Beat Each Boss | Ch. 6: Shuten Doji, Lady Osakabe and Kashin Koji