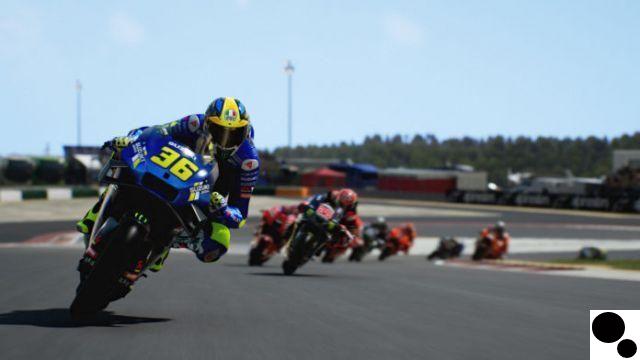 There is a huge collection of games and racing titles where you can get into a vehicle to move around freely. However, if you're looking for more specific style vehicles to race, such as motorcycle titles, you're in luck. In this list, we are going to highlight ten motorcycle video game titles that you can play on PC. These are some of the best games available that are worth picking up and trying in 2022.

The Crew 2 is a pretty fun racing game in general from Ubisoft and it's not necessarily just about motorcycle racing. Instead, Ubisoft made a game where they took the USA and scaled it down for the full racing video game experience. As a result, players traverse different terrains and reach various iconic locations across the country. You can reach heavily forested areas of a major city just by driving.

As mentioned, the game features more than just motorcycles, as players can quickly switch between cars, planes, boats, and motorbikes. It's just about experiencing how you would like to run in the area. While there are plenty of races you can take part in, a good part of the game is just about traveling freely and seeing the different areas that appear. This game became available in 2022, so it's unknown if we'll see a successor, but in the meantime, you can still have a little fun in this game today.

The Monster Energy Supercross – The Official Videogame series has been around for quite a while and we currently have the fourth main installment. This game comes from the Milestone srl development team which we will cover more games from this studio later in the list. That said, this is another simulation-style racing game based on the Monster Energy AMA Supercross Championship. You will have a career mode where you will attempt to make tweaks and adjustments to outshine the competition.


There are a total of eleven stadiums and seventeen tracks to go through. Likewise, here you will find more than a hundred different brands that you can again customize your bike and try to transform your status from a rookie to a professional racer. Now, the latest installment has just been released in March 2022, so there are bound to be some tweaks. That said, there are also previous installments readily available to players that have been fairly well received.

Road Rash was quite the iconic racing game at the time. It was an arcade racing game where players race down the road on their motorbikes against the competition. However, what sets this game apart from others is the fact that players are given weapons or the ability to punch and kick their competitors. This series of games required players to defend against AI competitors or try to take them down as you strive for the top spot.

Years later, we have a spiritual successor with Road Redemption. The game offered the same overall gaming experience but was designed for the modern platform. After funding its campaign through Kickstarter, the developers were able to release this game in 2022 where again your racing on the road on your motorbike. During this time, you will have the option of using a wide range of weapons such as bats to guns. Remember to avoid the police who will seek to stop this race and end the madness.

Grand Theft Auto V isn't just about motorcycles or racing. This juggernaut of a game released in 2022 and continues to be just as relevant today all these years later. Rockstar Games outdid themselves when it came to developing Grand Theft Auto's latest main installment and while there are now memes about how long we've been stuck on this game, fans can still find it just as enjoyable today. There is an exciting story based on three criminals working to live a life of crime and emerging clean with a huge open-world map that players can explore freely with or create mayhem with.


We also can't forget to mention that Rockstar Games also released an online component that was an IP money-making machine. Anyway, the reason why we have this game on the list is because you can move around on a motorbike in this game world. There is a wide range of different motorbikes available both offline in the world of single player campaign as well as in the Grand Theft Auto Online experience. Meanwhile, players can compete in various impromptu races with online friends to real racing events.

If you're a fan of real-life motorcycle racing, you might already be familiar with the TT Isle of Man. This is a real-life event with skilled runners from around the world competing against Snaefell Mountain, a course you can easily watch right now thanks to countless YouTube videos. The course is also incredibly dangerous and there have been more than a few accidents that have happened here.

With a ton of tight turns, narrow roads, and it's just a path that riders need to be incredibly careful when traversing it. TT Isle of Man was a popular game, but TT Isle of Man: Ride on the Edge 2 amps up the gaming experience. Again, this game has plenty of courses and bikes to race with. You'll want to hit the various courses before attempting those more challenging spots, much like Snaefell Mountain. That said, it's a game worth checking out if you haven't already.

The MX VS ATV series didn't see every game come to the PC platform, but one of the biggest hits that managed to come out on PC was MX VS ATV Reflex. This game was released in 2022 for PC and was generally well received. As the name suggests, the game is based on different motorcycles and ATVs with a ton of offroad racing.


You will have to cross rivers, swamps and sand dunes. There's a good mix of different courses to ride, but during these races you can try and pull off some freestyle tricks in the air. Of course, you'll also have the option of tweaking your vehicle for use in the competition.

Sony has a pretty massive collection of exclusive video game titles that for years were only available on Sony's console platforms or their short-lived series of handhelds. However, things have started to change recently and Sony has started to open up its range of exclusives to the PC platform starting with Horizon Zero Dawn and more recently releasing Days Gone. It was a title that first released in 2022 for the PlayStation 4 and it brought out a survival horror experience. In this game, we were thrown into a world entering a zombie apocalypse with humanity breaking down into small factions.

It's here that we're cast as Deacon St. John, a former outlaw biker who lost his wife during the height of the apocalypse. Now acting like a drifter with his friend, Deacon spends most of his days doing odd jobs for nearby faction locations to earn goods. However, our protagonist remains hopeful of finding evidence to piece together what happened to his wife all those years ago. As a biker, players will primarily travel this world on a motorbike which you can upgrade as you progress through the game. Meanwhile, there is a real need for gas and to make sure your bicycle is powered for the journey ahead.

The Ride series is another very popular one for those who want motorcycle racing game experiences. Currently, the latest installment to hit the market is Ride 4, which comes from Milestone srl, a development studio known for delivering some pretty popular racing video games in the past. Ride 4 is a motorcycle racing simulation game where you have to shift body weight to perform turns.

Ride 4 certainly has a learning curve to overcome, but again the Ride series has grown in popularity so if you haven't given the games a chance in the past you will find that Ride 4 will be readily available for the players. at present. After its release in 2022, you will find that this game will be supported for quite a while. DLCs ​​have been released to give players more content to enjoy, although this game already has quite a rich gameplay experience with the range of tracks and motorbikes.

Much like the Ride series, you'll find that developer Milestone srl was responsible for MotoGP 21. This is another simulation-style racing game where players race through the 2022 MotoGP season as they compete in a variety of races. Again, given that this is a simulation game, you'll find there's a ton of focus on keeping track of different aspects of your motorcycle.

Meanwhile, it's all about knowing the courses and making sure your bike's performance is capable of getting through the races competitively. This might not be a game for everyone, especially if you're looking for a more arcade experience, but those who find this game enjoyable will find DLC to add content to the game or even previous installments like MotoGP 20 to pass. the season before the races.

Trials games have exploded in popularity after just starting out as a Java game. After that initial release in 2000, the game's IP evolved into a big cross-platform console release, with the latest installment being 2022's Trials Rising. This particular installment is the one we recommend you try if you haven't given a luck at this IP address in the past. Trials Rising is a racing game but also a 2.5D physics platformer. Throughout the game, players try to maneuver their biker through several different courses.

It's incredibly easy to tip your biker over, in which case you're taken back to a checkpoint. However, you will soon master the physics and can take your biker over different obstacles, jumps and different terrains. Likewise, there are races you can participate in with multiplayer options as well.