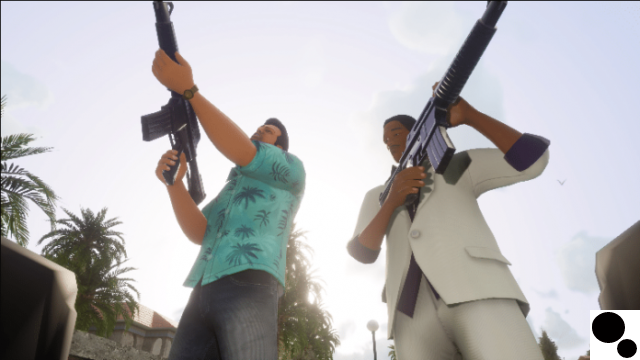 To get the best Grand Theft Auto Vice City guns, you will have to work. The best gun shop - called Phil's Place - needs to be unlocked. You can't just find it and start buying miniguns and ranged bombs right away. If you're looking to blow everything up much earlier in Vice City, this is what you need to do first. It takes some money and you will have to complete boring missions, but the reward is worth it.

This Armory is an unlockable asset that sells powerful weapons like the M-60 Light Machine Gun, Ranged Bombs, Rocket Launcher, and Devastating Minigun. These weapons can make later story missions easier - they're expensive but also incredibly powerful, and there's nothing stopping you from unlocking all of these weapons very early in the game. The only thing stopping you is the expensive initial purchase, but there are ways to generate the money you need fairly quickly. Try running over lots (and lots) of parking meters. The cops won't even attack you!

At Phil's is a perk where you can buy four of the best guns in Vice City – guns that aren't available anywhere else. To acquire At Phil's, you will have to buy the Malibu Club.


Complete Phil's missions and he will reopen his weapon shop. He will sell you his valuable heavy weapons, and these weapons are absolutely worth the price of admission. If you take these missions in the middle of the game, you will be able to play with these weapons for a large part of the game. Otherwise, you could miss out and only have the weapons available after completing the story.

Here's what Phil sells in his compound.

With a minigun, M-60, and rocket launcher, nothing can stop you from rampaging through all of Vice City. The pathetic villains trying to take over your empire? They don't stand a chance.