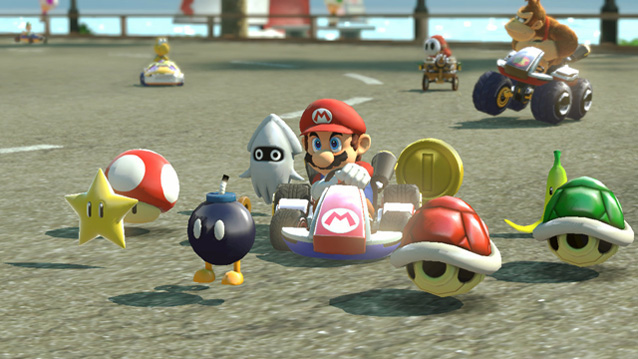 There are a ton of great go-kart racing video games out there and we wanted to pick out a few titles that you might be interested in. In this list, we have ten recommendations for you. That said, this list could have easily turned into a ton of Mario Kart recommendations, as it's one of the most popular go-kart racing video games of all time. However, we're sticking with just three installments that differ from each other in this franchise. The rest are other fun titles worth looking into.

It was a bit surprising to see Nintendo taking an interest in the mobile market in terms of smartphone apps. However, when they revealed their plans to release their IPs on Android and iOS, one of those franchises turned out to be Mario Kart. Mario Kart Tour was first released in 2022 and it controls pretty well. Sure, the controls take some getting used to, but it's pretty simple to understand. A simple swipe will trigger your power-up with presses and holds to steer the vehicle in the desired direction. Nintendo has made the game somewhat easy to understand for just about everyone. Now that it's a mobile game, there are in-app purchases and they can be a bit overwhelming, but at the very least this is a game you don't necessarily have to invest money in. money to play casually. Likewise, the game is free, so there is no reason not to try this title.

Kirby even had a bit of karting at the time with Kirby Air Ride. This game has players racing with different Kirby characters across several different maps. Now, this was a Nintendo GameCube title where Kirby could race around the track without players pressing a single button to speed up. However, to perform turns, players would need to hold down a button to brake. It was different and players received the usual bonuses from the iconic Kirby franchise to use against competitors on the map. You'll even find a top-down racing game mode that was something a little different from the main game's usual third-person courses. However, what may have allowed the players to win the title was the fact that there were so many objectives to participate in the races. These would eventually unlock certain in-game content, such as new stars for Kirby to race with. Likewise, these stars had their own attributes, which provided a reason to unlock as much content as possible.

Nickelodeon Kart Racers 2: Grand Prix is ​​a game that might appeal to network fans and the various characters in the game. It has the typical tropes you'd expect of a kart racer, but it's decorated to feature different characters from various shows from Nickelodeon. As a result, you'll find characters from Hey Arnold, Teenage Mutant Ninja Turtles, and Spongebob to name a small handful. Sadly, don't expect a dub here, but again, this is a title you can have fun with. With just under thirty characters and courses to go through, you'll find a good variety here. Meanwhile, the races themselves have various bonuses that players can obtain to use against their opponents. As you race and earn in-game currency, players can use the funds to buy different upgrades for their vehicles so you don't have to strictly build a stock kart all the time. You'll even find it's possible to add a crew to your racer that can be activated to provide more upgrades throughout the race.

Beach Buggy Racing is a kart racer that not only hits console platforms, but also iOS and Android. Again, it's exactly what you'd expect from a go-kart racing video game title where you race down different themed levels. You will have different bonuses to pick up and shoot at your opponents while striving to reach the boss fights which will have players racing against said boss in hopes of unlocking them in the game. It is also possible to customize your car and perform necessary upgrades. Likewise, you'll find that each character has a unique power they can unleash once per run, so you're still armed from the start of a run, but knowing when to use it will be key here. There's also a sequel if you like this game which you'll currently find for around $10 on most platforms outside of smartphones, in which case you're looking for a free game.

Another Mario Kart game that made the list is Mario Kart Live Home Circuit. It is a different type of Mario Kart game and the latest installment to be released so far as of this writing. In this game, players are given a physical RC car and the necessary components to create their unique course in your home. From there, the vehicle is controlled by your Nintendo Switch, in which case the game brings out an augmented reality Mario Kart experience. You'll race home while virtual opponents and power-ups appear on the track, much like a traditional Mario Kart title. While it's a bit of a fun experience to have, it does make things a bit limited to who can buy this game. Switch. Likewise, you need a good amount of space to make a course attractive to play. Then there's the task of setting up that course and removing it when you want to play the game. If that doesn't seem like a deterrent, it might be a title worth picking up.

Do you remember ModNation Racers? It was a big hit or maybe a hidden gem at this point for the PlayStation 3 and PlayStation Portable. The video game was an exciting kart racer where not only did you have the variety of tracks, racers, and power-ups to choose from, but there was also a ton of creativity here. Players could create their characters, customize their vehicles, and even create levels to race through. It was something that could be done by not only adjusting everything yourself, including terrain elevation, but you could even allow the game to generate content so there was plenty of content here for players. One of the things that made this game a bit unique compared to some of the other competitors was the fact that players could drift and rack up meter while racing. Thanks to this counter, the player could initiate a boost or bring out a shield to protect against attacks from other riders. Sadly, that game didn't survive with a new installment, but there's still hope that Sony will dust off that IP and bring it back again.

Sonic offers different kart racing games, but we went with Sonic & All-Stars Racing Transformed because it not only contains the various characters from the Sonic franchise, but also other Sega character IPs, such as Crazy Taxi, Super Monkey Ball, Space Channel 5, Alex Kidd and Shinobi to name a few. You also have a variety of themed courses among these games to race, but what might interest you is the fact that the races will transform the vehicle depending on the terrain they are racing on. Players can race in a car, boat, or plane as they progress through the rounds. Meanwhile, as you might expect, there are different weapons you can get while running and throw them at your opponents.

When Nintendo dominated the kart racing scene with Mario Kart, Crash Team Racing provided a competitive PlayStation alternative. Sure, it didn't do as well, but it had a strong following. Fortunately, years later, the game has been remade for modern platforms such as Nintendo Switch, PlayStation 4, and Xbox One platforms. Not only did we have an overhaul of the visuals for the courses, but also many improvements. If you don't remember the original game, this is a go-kart racer that still has the usual tropes of what you'd expect from a traditional go-kart racing game. However, the title centered around the Crash Bandicoot franchise to race against. With Crash Bandicoot making a resurgence with Crash Bandicoot 4: It's About Time, those of you who haven't given Crash Team Racing Nitro-Fueled might be missing some exciting gameplay.

Developers Rare have also taken over the kart racing genre for the Nintendo 64 with Diddy Kong Racing. It was a very similar game to Mario Kart 64 at the time, but what was different was the line of characters that players could race in. In the game, we had a storyline for players to run through, followed by Diddy Kong and his friends racing. against different bosses to defeat an evil wizard pig named Wizpig who was trying to take over the world. Here we are once against the race on courses where players can collect bonuses to act as either a boost or an attack on an opponent. Unlike some of the other games, there were clear indications of level powers and by collecting the same bonuses, the player would be offered a stronger alternative, such as a bigger boost or more rockets to fire against a enemy. Additionally, players were able to race through the different levels in hovercrafts, planes and of course karts. While that title was a big hit for the Nintendo 64, Rare was eventually purchased by Microsoft, ending the planned Nintendo GameCube sequel.

Finally, the biggest kart racer currently that players are joining online to race against other players and friends is Mario Kart 8 Deluxe. Originally released in 2022, Mario Kart 8 was a big hit for the Nintendo Wii U but unfortunately the console platform itself wasn't a big hit. As a result, Nintendo came in and made some upgrades and characters to make Mario Kart 8 Deluxe stand out on Nintendo Switch. It's just a classic Mario Kart experience with a wide range of levels, iconic characters, various kart customization options, amazing visuals and a great soundtrack wrapped up in a very well designed entertaining package. You can't do much better than Mario Kart 8 Deluxe right now and despite being a port of the Nintendo Wii U version, this game still holds up incredibly well today. Fans are now waiting to see if Nintendo will release a successor to this game or even a DLC to give more content to the Nintendo Switch, but for now the base game is all we have and it's incredibly easy to spend countless hours in this game.