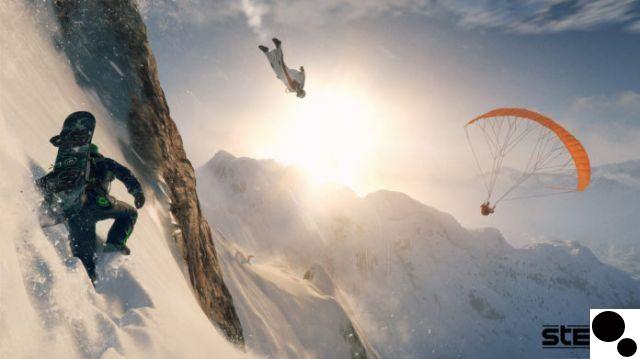 Snowboard video games have been around for ages. There are so many different video game titles available to pick up and play, it can be a bit difficult to know where to start. Unfortunately, snowboarding video games are a bit rarer these days and that's something we hope to see change in the future. Despite the lack of new video games on the market, there are still some solid games worth checking out that have been released over the years. In this list, we'll highlight some of our favorites below.

As I mentioned in the introductory paragraph, there aren't a ton of new snowboard video games. If you're looking for something for more modern video game console platforms, chances are you've come across Mark McMorris Infinite Air. It is purely a simulation type snowboarding video game where players will have a procedurally generated mountain to snowboard on and easy to understand controls. For example, crossing the mountain and doing a big jump will allow players to perform tricks. All players really need to focus on the analog sticks to initiate a round.

However, there is one element that has been praised for this game and that is the level editor. Players will find that the level editor will give them the freedom to create their mountain for snowboarding. Here you will have over a hundred different items to use on the mountain, such as ramps and pipes, while adjusting the snow itself. For example, players can offer more fresh snow to more packed snow on the mountain track. Luckily, it's possible to take your created levels and upload them online for others to download and enjoy. This ultimately means that you can also browse through the various downloaded levels to get new runs.

#9 Mario and Sonic at the Winter Olympics

Mario and Sonic at the Winter Olympics is worth mentioning because the series usually features snowboarding. For example, there are snowboard races that allow players to race down a mountain against characters from the Sonic and Mario franchises. It's light-hearted with players trying to reach the finish line first while performing tricks along the way, like flips and backbends. There's more to this game than just snowboarding, but it's at least worth mentioning for those of you looking for something a little easy to pick up and family-friendly.

Dark Summit is a snowboarding game developed by Radical Entertainment in 2001. If you don't know the name of the studio, they are the people behind the Prototype franchise and were Bungie's support team when they were developing the first Destiny video game . This is an arcade-style snowboarding game where players traverse different descents and deliver a barrage of tricks as they descend the mountain. Meanwhile, the game is all about earning points, which would give the player new boards that would make different attributes easier to perform, whether based on jumps or speed. Likewise, the more points you earn, the higher you can climb the mountain for better races.

Steep is a game developed under Ubisoft that revolves around a variety of winter sports activities. However, as this list suggests, this game features snowboarding and it is a simulation type game. Players will race down a massive mountain by participating in challenges and ranking up in-game currency to spend on different cosmetics or gear. It is also an online game for players to connect and cross the mountain as a race. Meanwhile, players who wish to restart from the top of a mountain can do so freely. As this is an online game, one of the most interesting aspects that players can participate in is the fact that they can trigger a challenge. If you love your race and want others to try it with all the different obstacles you've been through, then you can make it a challenge for others to try online. In the meantime, if you're a little bored of snowboarding, there are still other activities you can take part in, like paragliding or using a wingsuit suit.

Stoked is a snowboarding game released for Xbox 360 and PC platforms in 2022. You can think of Stoked as being a bit of a simulator. Here players work to earn sponsorships and some credibility as professional snowboarders. However, to secure these sponsorship deals, players will need to complete a series of challenges across multiple mountain tracks. At the start of the game, you're just one person, snowboarding for fun, but it's when you rack up points and complete challenges that the sponsor begins to take notice. There are plenty of jumps available for players to perform tricks on and a few different mountains to snowboard on. There are even nice weather elements added to this game, such as snow piling up as you race or rocks starting to come out of the tundra below when there is no active snow. . If you're looking for this game, it's worth picking up the Big Air edition which adds a few more mountains, improved frame rate, and other finer improvements.

1080 Avalanche is a game released in 2003 for the Nintendo GameCube and it happened to be also the sequel to 1080 Snowboarding for the Nintendo 64. It is an arcade style snowboarding game where the goal is more to cross errands than delivering a bunch of stuff down the mountain. As the name suggests, this game plays on avalanches, which again goes with racing. Outside of normal races, players can participate in events where the player must outrun an avalanche. While at the time 1080 Avalanche was meant to rival SSX, it's still a solid snowboarding game and hopefully we'll see that series make a comeback at some point, but for now , there was no successor release outside of it. of 1080 Avalanche.

Cool Boarders is a series worth mentioning because it was very successful years ago. This is an older series with gamers mostly seeing the games hitting the market from the original PlayStation aside from some of the spin-off games that were released. There are four main installments and most would consider the last two installments to be the games worth checking out for the series. If you had to pick one game from the series, you'd probably want to pick Cool Boarders 4. You'll find tighter controls and a bit more content to chew on.

In the game, there are several game modes, whether race-based or trick-based. Meanwhile, players are also striving to unlock more professional snowboarders for use in the game. One of the coolest things about this entry is the feature to create a custom snowboarder. This option includes not only creating a person, but also customizing their snowboard with even finer adjustments such as stability or speed. It might be an older game today, but that doesn't mean there isn't still plenty of fun to be had here.

Microsoft attempted to get a snowboarding series off the ground on the original Xbox console platform with Amped. There were only three installments to this series, with the third being released for the Xbox 360. However, the most popular of the three installments was Amped 2, a game released in 2003. It is a game that acts a bit more realistic so it's not as over the top arcade experience in something like the SSX series but still had a ton of players enjoying the game. Throughout the game players had to complete a series of levels which had their own challenges. These would include areas such as specific tricks, point rankings, even finding hidden snowmen in the mountain where you would upgrade the character. Progressing your character was also very important if you enjoyed the online gaming experience back in the day. With Amped 2, players would not only improve their offline character in-game, but they would see those skills enhanced in their online counterpart. Unfortunately, the game series didn't take off after Amped 3, which was no slouch. Amped 3 just came out as a little mediocre and who knows what might have been had the series been given another chance, maybe things could have changed but as of now the series has been dormant since 2022.

Alto's Adventure is a bit different from the other games on this list. It is a game that started on smartphone platforms. Gamers with iOS, Kindle Fire, and Android devices were playing this game long before it was released on modern console platforms. It's a simple endless runner type game and if you've never heard of the genre, it means that the game level continues endlessly until the player loses a life. In this game, players take on the role of a snowboarder going down a hill while having to jump over obstacles. In the air, players can complete a few laps before descending and trying to break their distance record again. There are a few small objective elements attached to this game with players having an assortment of different goals whether they are reaching a certain distance or crossing a big gap. For those of you who want a bit more of a casual time-killer experience, Alt's Adventure is worth checking out. That said, there's a sequel that has also since been released that offers the same style of gameplay, but rather than being in the snow, players will go through sandboarding.

Tony Hawk Pro Skater may have dominated the gaming industry for skateboarding video games, but when it comes to snowboarding games, fans loved SSX. The series started in 2000 and gave players an arcade-style snowboarding and skiing experience. It was lightweight and didn't rely on realistic physics. Instead, this game was all about increasing speed, performing big jumps, and performing cool tricks. There were several games in this series, one of the biggest releases being SSX Tricky. Players would try to unlock more characters with boards while competing in world circuits in unique events.

As with all video game series that have been released, some titles didn't receive the same praise as their predecessors, but in general these games were still rated pretty well. It's unfortunate that we haven't received a new installment since the 2022 release of SSX, the reboot of the series that has once again been acclaimed by critics and fans alike. We hope SSX makes a big comeback one of these days, especially with Tony Hawk's Pro Skater having some sort of remake for modern platforms. At the moment, it doesn't appear that EA is making any moves to get this IP off the ice.