7 Best Hunting Games on Xbox One 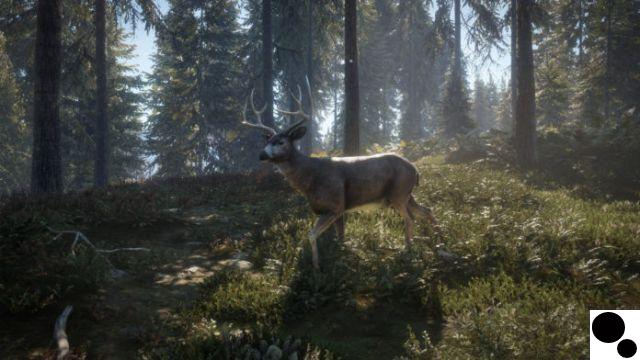 Are you looking for game to immerse yourself in for a few hours? There are a good number of hunting titles that we can recommend on Xbox One. These are games you can pick up right now and enjoy both as a single-player experience or in multiplayer with friends. Of course, we're also going to be making a few unique stock picks in this list. Not only will you have more traditional hunting games to choose from, but there are also different types of hunting titles that you might be interested in. We'll start the list with a few other unique hunting video game titles and end it with the more traditional hunting games you can choose from right now.

To start this list off, we're going to tag a game that's a little different and not a traditional hunting game. In Hunt: Showdown, players will work in groups as they compete for a contract. In the world there are countless monsters and you are a group of mercenaries in charge of eliminating a troublesome monster in the area. The problem is that you have other players looking for the same bounty contract. Here you will need to search the area for the monster and shoot it down.

However, once you kill the monster and collect the bounty, the monster's location is displayed on the map for all other parties playing in the game. This will prompt players to run to the area in hopes of catching your group with the premium. It's a brutal fight to get the contract back and reach the exit point. As mentioned, it's not the most traditional hunting game you'd probably expect, but it's worth checking out with friends.

We've tried to avoid putting countless fishing games in this mix, but if you're more into fishing, a virtual alternative to research is Fishing Planet. This is a game that offers players a wide range of places to fish and a good selection of different fishing breeds that players could pull from the water. Likewise, this game offers a multiplayer mode so that you can fish or participate in challenges against other players online.

Similar to the more traditional hunting games on this list, there's a lot of gear you could use with this title. From lines to rods to reels, plenty of customization options are available to give players more realism. Although you also want to be careful how you fish, you can easily snag your line or break the reel. If you can't create the local lake or pond, this is a great virtual alternative that's also free.

Red Dead Redemption 2 is another game that has hunting elements. Chances are you already have this game and if you're in the mood to hunt, this game might be enough. There are a few missions in the campaign that touch on the hunting aspects of this western as you try to take down anything from a small rabbit to a large bear. It's pretty basic here, as you'll need to stay low and out of sight, otherwise getting too close to your target animal will startle it or potentially send it attacking.

Similarly, you will have to aim and drive an arrow or bullet in a place that will bring it down without ruining the meat or the skin. You can even experience this online with Red Dead Online by searching for different animals to sell their pelts or meat for a profit. Since this game has a good range of environments like open fields, tundra mountains to swamps, there are plenty of areas to hunt down different animals.

Monster Hunter World is another title that's a bit different. The Monster Hunter franchise has been around for several years now and one of the newest installments to hit the market is Monster Hunter World. In this game, players go through different hunts against giant monsters. This usually requires players to have the proper gear to best take down the beast. Additionally, you'll want to study the monster so you can best know how to defeat it and what moves it will trigger on the player.

Luckily, you don't have to fight alone as this game supports multiplayer with players coming together in these epic brawls. When you eventually defeat a monster, you'll be rewarded with loot to craft better gear and weapons. As the name suggests, this is an open-world game where the Capcom development team is getting rid of the old style of zones that players were previously faced with. Likewise, it's no longer the last installment of the franchise with Monster Hunter Rise hitting the market, but that particular game isn't available on Xbox One or at least it's not available as of this writing. description.

Continuing on from Monster Hunter World, we have Dauntless. I'm not going to spend too much time on this, but if you're not interested in spending the money to see if you'd like Monster Hunter World, then there's Dauntless. It's basically a free Monster Hunter World alternative where players do more or less the same thing here. However, combat is toned down a bit in Dauntless, so you might find it to be more of an arcade game or at least a simpler version of combat compared to Monster Hunter games. There are a ton of different topics that have come up comparing Dauntless to Monster Hunter, so you'll easily find some good breakdowns between the two, but being a free-to-play title, it doesn't hurt to give this game a try.

Hunting Simulator 2 is a bit like TheHunter: Call of the Wild, a game we'll cover next. Here you will hunt different prized animals. Players can venture through Texas, Colorado and the lush forests of Europe. As you roam these areas in search of your prey, you'll also have a number of different useful pieces of equipment to use, including an assortment of weapons and even a hound to help you sniff out the prey.

However, unlike TheHunter: Call of the Wild, this is a single-player focused game, so there's no chance of multiplayer here. Still, if you play well solo, you might find some fun with this game and the animal AI to make hunting an exciting experience.

#1 TheHunter: Call of the Wild

TheHunter: Call of the Wild, is a game that is a traditional hunting title. Again, much like Hunting Simulator 2, you're looking for valuable animals to take down. Players can not only expect many different animals to hunt, but there will also be different guns and bows to equip. You'll also get tools to help make your hunt more favorable, which means adding different scents and decoys to the mix. That said, you will also find that this game will feature a wide range of biomes to explore.

During the actual hunt, players will need to explore areas, follow trails, find where animals travel, and investigate the animal you are looking for to determine if it is worth shooting. It's also a multiplayer game so you and your friends can get together online. You will find that this game offers both a cooperative mode but also challenges to make things a little more competitive.

add a comment of 7 Best Hunting Games on Xbox One