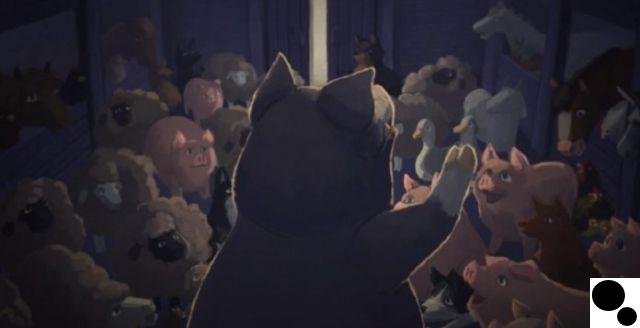 You might make the wrong decisions, so where would we be?

The Indie Collective has announced a release date for the video game adaptation of George Orwell's landmark novel, Animal Farm. The strategy-based adventure title will launch on PC via Steam, as well as iOS and Android platforms, on December 10.

Developed by Nerial, Orwell's Animal Farm will put players in charge of managing the resources and defending the famous Manor Farm, where a menagerie of barnyard animals have overthrown their human owners in an effort to create a better world for themselves. However, under the reign of the pompous Napoleon pig, the other species soon come to learn that while some animals are equal, some are more equal than others.

Publisher The Dairymen has released a new trailer, recounting the infamous moment when Napoleon explains to his animal companions how it would be best for everyone if Napoleon made all the choices that are right in governing the affairs of the farm, to prevent them from making 'mistake' decisions.

Build and expand the Republic of Animals, strengthen your defenses against human resistance, fight the violent elements of the four seasons, and grow your land and population. Manage the politics of your growing community as you see fit, en route to one of multiple endings and "destinies" for Manor Farm and its inhabitants.


It's a strange but intriguing and inventive choice of source material for a video game. It'll be interesting to see how the characters, world, and politics of this seminal tale - now over 75 years old and still eerily relevant - translate into an interactive gaming experience.

Orwell's Animal Farm will launch on December 10 on PC (via Steam) and on iOS and Android platforms.

Where is the coffee in Animal Crossing? ❯