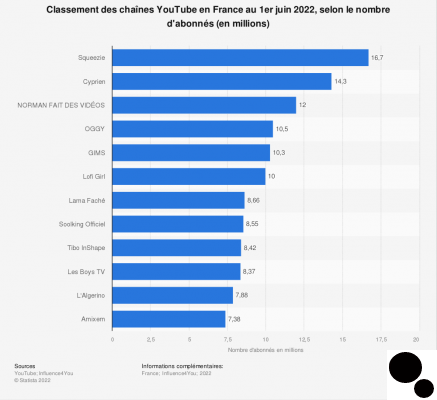 YouTube's growth is unquestionable. Over two billion users regularly use YouTube, which is equivalent to a third of all people who use the Internet. In fact, in the United States, the population between the ages of 18 and 49 consumes more YouTube than cable television itself.

Behind this great growth are many people who are dedicated to creating content on YouTube. The 'youtubers' have been able to understand and take advantage of the dynamics of the network and this is reflected in their channels with millions of subscribers.

This short introduction aims to get to know a little better the most followed channels on the platform. However, it should be mentioned that all official YouTube channels (Music, Games, Sports, etc.) will be removed and we will only consider channels from people or companies outside the platform. Later, all of them will be displayed in the full list.

Vlad and Niki is a YouTube channel for children whose protagonists are, as the name of the channel suggests, Vlad and Niki. Sometimes their mother, Victoria Vashketova, as well as their little brother, Christian Sergey Vashketov, are also protagonists.

Image of Russian brothers Vlad and Niki, whose YouTube channel has over 73 million subscribers.

Zee Music Company is one of India's leading television and entertainment companies.

World Wrestling Entertainment, known as WWE, is one of the most popular companies in the world, especially for its wrestling events.

Like Nastya Vlog is a Russian family's educational and humorous channel.

Kids Diana Show is an educational and entertainment channel for children.

Without a doubt, one of the creators of the last year. Its growth in recent months has been stratospheric. Jimmy Donaldson, better known as MrBeast, is an American YouTuber and businessman, popular for his challenge videos and challenges for money.

Felix Arvid Ulf Kjellberg – known on the net as PewDiePie– has more than 111 millions of subscribers. The young Swede's channel was the most followed on YouTube between 2022 and 2022, when "T-Series" took over. Currently its content is characterized by variety, being able to find "gameplays" of Minecraft to reactions to other videos of the moment.

SET India is an Indian television channel. The official channel of the channel has experienced strong growth and already has more than 122,0 millions of subscribers.

Cocomelo – Nursery Rhymes is a cartoon channel for kids. Its objective is 100% didactic. The channel currently has 125 million subscribers.

official YouTube channels have been selected. Data updated as of November 1, 2022.