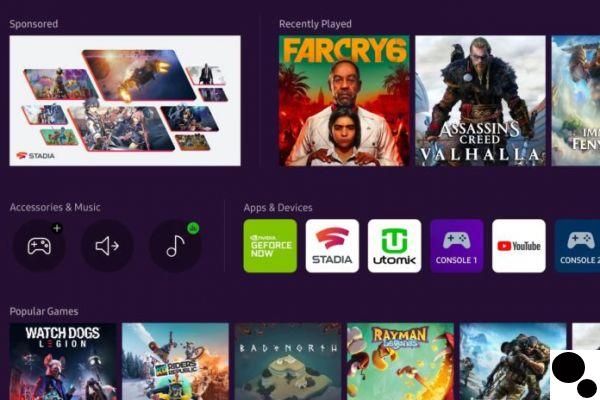 This is exciting news for cloud gamers.

Samsung announced a new line of smart TVs at CES 2022. While gaming on a big TV is mostly done through a console like the PS5 or Xbox Series X/S, cloud gaming is growing fast. Samsung is continuing on this path by adding cloud gaming services like Stadia to its TVs through a new feature called Gaming Hub. The new services will be showcased at CES 2022.

The Gaming Hub is Samsung's Smart TV menu dedicated to gaming that will launch on compatible Samsung TVs later this year. As part of its CES announcements, Samsung revealed that several services will be available in the Gaming Hub. Cloud gaming from Google Stadia, Nvidia GeForce Now, and Utomik will be available at launch. The company also promised that more services will be added in the future. This is a huge announcement as gamers won't need a console or other hardware to play. Players will be able to simply pair their controllers to the TV. Additionally, Samsung Gaming Hub will make YouTube games available so gamers can follow their favorite streamers.

The Samsung Gaming Hub will not only be optimized for cloud gaming. The company also said that HDMI-connected consoles such as a PS5 or Xbox Series X/S will be integrated into the system and allow passthrough controller inputs. Players will be able to easily switch between cloud games and console games, making switching controllers unnecessary. Samsung has promised that PlayStation and Xbox controllers will be compatible at launch. The company also announced "AI Gaming technology" that will learn users' interests and create a list of game recommendations on the TV's home screen.

Cloud gaming is an ever-growing technology with Samsung and LG competing in the space. The two companies battled for the rights to stream games from Gaikai and OnLive in 2022, while select Samsung TVs won the rights to Sony's PlayStation Now streaming service from 2022 to 2022.


While image and audio quality still can't consistently match console or PC gaming, there's no doubt that cloud gaming is becoming a bigger part of the future of gaming. 'industry.

Samurai: Battle Through Time is an unexpected new game ❯