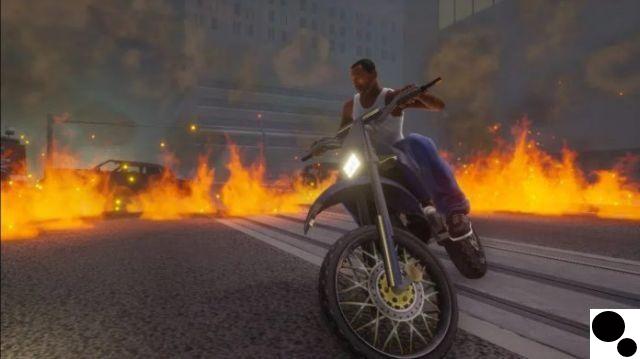 The GTA Trilogy is here. Rockstar Games is rebuilding GTA3, GTA Vice City, and GTA: San Andreas for next-gen audiences. The GTA Trilogy introduces new, modern controls and improved graphics that honor the originals while ridiculously upping the resolution. This is how we all imagined the GTA 3D Trilogy looked all along. The games don't look so different until you put the images side by side. Then you will absolutely notice how much work has gone into these massive remakes.

And the real draw of the trilogy is in GTA: San Andreas, one of the biggest and most ambitious entries in the series. CJ's gangster saga is etched in our collective memories from the PS2 era, but it's been a long time since the initial release in 2004 (!). As a kid, I didn't know much about San Andreas outside of rumors of UFOs and bigfoot in the schoolyard. Although the rumors are false, there are plenty of other secrets in San Andreas you may not be aware of.

To help you get back into that old-school entry way, we've 10 tips – activities you need to do, methods for infinite money and tons of bonuses you can unlock. Who knew dating could be so lucrative? Here's everything you'll want to remember about GTA: San Andreas.

#1: Get These Weapons Early On

You start GTA: San Andreas with next to nothing, so there's no reason not to stock up immediately by collecting a few easy guns in your neighborhood. Take a basic Gun in the back, behind the brown house on the corner in your starting neighborhood. You can also get a Tec-9 on the roof of Sweet's House, and a Micro-SMG under the bridge behind Carl's house. There is a set of Tactical ballistic vest there too. Easy for quick reloads between missions.


If you are looking for real firepower, you can acquire a M4 assault rifle from San Andreas International Airport. Go to the guard post, park a car and climb on it to access it without instantly triggering the wanted level alarm. You can always brave the wanted level and grab it – if you dare. One of the other best guns in the game is the SPAS-12, but it only becomes available when you can get to Las Venturas. So grab it ASAP once you're far enough along in the story.

San Andreas went all out with the Customizable Weird JC. By exercising or eating too much, you can turn your lean CJ into a towering mass of muscle or a little pot of fat. By completing mini-games in the gym, you'll gain muscle - and muscle basically improves everything about your stats. gain muscle iimproves your maximum health, Maximum Stamina, and increases your sex appeal rating, which is only practical for dating. To build muscle mass fast, just hit the gym and complete workout mini-games until you're literally not allowed to continue. Repeat, repeat, repeat!

Once you're locked out, you can come back later. Take a break. Eat a burger. Do a mission or two. there is literally no reason to gain weight. Some characters and NPCs will comment on your height, but it won't improve your stats. If you really need to gain weight, just go to the nearest burger joint and buy as much food as you can. Eat and eat and eat. That's all we can say about it. No, this system is not incredibly realistic.

Fire is one of the deadliest elements in San Andreas. Even getting close to the fire will melt your health bar ridiculously quickly. This allows to use cocktails molotov or flamethrower an exercise in extreme caution. You might as well burn yourself alive as all the other bad guys running around. To make your life easier and your rampages a lot more fun, you can become completely immune to fire by completing firefighter duties.

To start the firefighter missions, you must steal a fire truck with a mounted water cannon on the back. Once done, you can start quick missions where you are tasked with putting out random fires. Travel to Grove Street (The dead end) and start the side quest. The fires all spawn nearby, so you can drive quickly to eat on the spot, put it out, and level up. Once you reach Rang 12 in firefighter missions, you unlock fire immunity. Not a bad upgrade.

#4: Easy Trick To Level Up Your Weapons

Each weapon has a " weapon skill“statistics. By shooting well, you can increase your proficiency with any weapon, from the poor man to the gangster to the hitman. To make your guns worth it, you'll want reach Gangster Mastery of weapons as soon as possible. And you can do it easily at CJ's local garage. There's a sneaky trick you can use to make it easier to upgrade your weapons. No need to shoot anyone.


Park two cars in CJ's house - in the garage. It will work with any garage you own. Shoot the car with the weapon you want to upgrade. Once the car starts to smoke, run away until the garage door closes automatically. This will repair the parked car. Head back to the garage and the doors will open, revealing your fully repaired cars. Just keep dumping ammo into these cars and then repairing them to quickly gain Gangster-level weapon proficiency with any weapon.

#5: Do Ambulance Missions To Easily Increase Your Max Health

Training isn't the only way to improve CJ's max health. You can also gain more health by completing side quests like Missions d’ambulance. It works much like firefighter missions — steal an ambulance, activate it and travel to pick up randomly generated wounded civilians. Just make sure you don't accidentally crush any.

To quickly increase your ambulance missions to rank 12, travel to Pin Ange. There is an ambulance easy to find in this very small town, and if you enable ambulance missions, your clients are all located in this small area near Mount Chilliad. The area is very small, which makes every ambulance job a breeze. Just save often. These can take a while.

#6: The fastest way to make money

Money makes the San Andreas world go round, and there's a simple, sure-fire way to make a ton of money real quick. In fact, there are three very good ways to earn money almost infinitely. Let's break them all down. Two are achievable from the start of the game. The third is for advanced money makers only, but you'll get a payout worth the wait.

#7: Make an appointment to make ER visits free and keep all your guns

Dating actually has a few advantages in San Andreas. If you are dating an NPC named Katie zhan, you'll get an incredibly useful upgrade — free emergency room visits and you don't lose your weapons after death. You can find it in Country Club Avispa San Fierro Region. She's a difficult girl, so you'll have to approach her with a strong sex appeal statistic. If she agrees to go out with CJ, then you will instantly gain her advantage. Death will not prevent you from keeping all your weapons. It's not a bad deal – just make sure to keep dating her once in a while. I don't want her throwing your ass off.

#8: How to start flying (and unlock permanent parachutes)

To start flying, all you have to do is steal a plane and go. But, if you want to fly without flying international airport every time, you will have to earn a pilot license. There are two ways to get a pilot's license – you can take flight school lessons, or you can just fly randomly until your flight skill is 20%. You can get the Dodo at Los Santos International Airport and start flying pretty quickly. Just climb the fence... or break in.

There is another option. You can steal a helicopter Easter Bay Airport, in San Fiero. Southeast of the airport, there's a tunnel through the cliffs that can give you access to the airport - go through the tunnel fast enough to launch yourself into the airport area. In addition to basic planes, you can also get a first helicopter.

What is the benefit of having a pilot license? You will unlock parachute when flying aerial vehicles. If you drop, you'll always have a parachute handy. If you don't have the license, you just surrender to your destiny. Having a license also gives you access to more planes in hangars at all airports. Don't ask why. It's just.

#9: How To Unlock Infinite Sprint, Bike, And Swim Through Heist

CJ isn't exactly a cat burglar, but if you steal a lot of stuff, you'll get a big reward. The mission is introduced at the start of the game, but you can start it from the start – just go to any Lock slot and drive the black van. You will have different places to sneak and steal. Beware of your noise or you may attract the attention of the police. Returning the items to the box will reward you with cash and bring you closer to completion.

Complete the complete burglar mission need to fly 10 000 $ worth of stuff, or about 25~items in total. You can find your first black van on Ganton Courts in Ganton, The Saints. Look in front of the gymnasium. bring a 9mm silencer to make your burglary jobs so much easier.

Seriously, this can be done before completing your first story mission in San Andreas. You will get a lot of pocket money, and if you complete the mission conditions, you will earn a Infinite Sprint advantage. It covers your stamina, so you can also swim and cycle forever. Perfect for those walking getaways.

#10: How to unlock final missions

To unlock San Andreas Final Missions, you must capture 35% of territory in Gang Wars. As you progress through the game, you'll learn all about gangs – recruiting them, earning respect, and leading raids to conquer territory from rivals. You don't need to eliminate all of your rivals to win the ending... only 35% of them. To cause a gang war, you must kill three rival gang members on foot. This triggers a fight. If your respect is high, you can recruit a large number of allies by pressing [D-Pad: Up] to follow you into a fight.

Pals won't win wars for you, but they will temporarily distract your enemies. Stock up on bulletproof vests and bring your best weapons – you'll need to kill the majority to claim enemy territory. Is it worth it. You will finally be able to complete one of the longest and most difficult entries in the entire series.

This only covers a fraction of everything you need to know in San Andreas. There are boring missions with simple solutions, cheat codes and much more. We'll let you discover some of these secrets yourself.

add a comment of GTA: San Andreas Definitive Edition – 10 tips and tricks you need to know before playing again