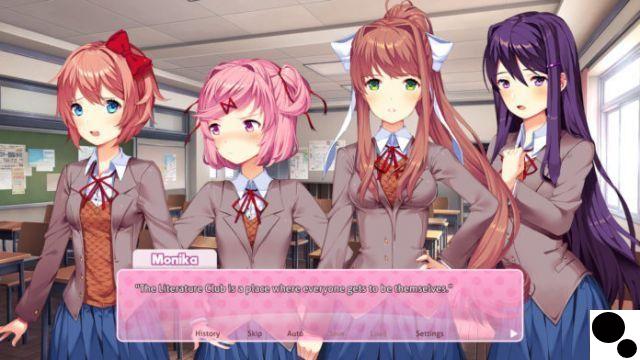 Doki Doki Literature Club is one of the most popular free-to-play video games you'll see on digital marketplaces like Steam. This is a dating simulator that mixes in horror elements, however, it's far from a game that remotely resembles a horror video game experience. On the surface, Doki Doki Literature Club is a visual novel, which likely follows a dating sim. That said, the surface is incredibly deceiving.

Players can expect a psychological horror game that plays with players. The deeper you go into the story and date the various characters, the more unsettling the game becomes. Sadly it's a game I really can't dive into with the premise as it would spoil too much and it's a title best tackled with really no knowledge other than knowing it's an experience quite unsettling horror dating simulation game. However, if you're not a big fan of disturbing scenes or want a straight-up opinion, you're in luck.

As mentioned, this is a game best played without having any knowledge of what is to come. It's a psychological horror title that throws players into a series of unexpected twists and turns. Although it is highly regarded as a popular video game experience, several gamers might not give this game a chance due to the troubling times that present themselves. We know that a new edition is coming out with Doki Doki Literature Club Plus and with that will come an option to alert players to disturbing scenes ahead.

This option will give players a preview of what to expect or players can read all the spoilers if they don't mind getting the narrative beforehand. In any case, this warning as mentioned will be completely optional. Players can disable warnings and enjoy the game as it was originally developed. Meanwhile, those who want to dive into Doki Doki Literature Club Plus can do so on June 30, 2022.